Earlier this week, May 18th, I was lucky enough to go to a pre-screening of Alice Through The Looking Glass, the newest Disney movie and the sequel to the 2010 movie Alice In Wonderland. My aunt does PR, and since the movie is aimed towards teens, tweens, and kids, my cousins and I got to tag along. I will say that this is my honest review and I wasn’t paid to write it, I don’t know if I’m supposed to say that in this case, but I figured I would, just in case. 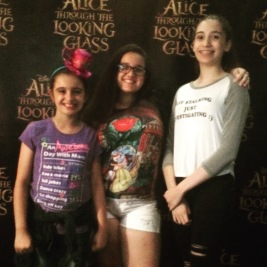 Left: The little Alice themed cookie and tea they gave us. How cute is that?

Right: Me and my cousins at the event. I’m the one in the middle, and yes, I am the oldest.

Audience: Teens who like Wonderland and younger kids (around ages 6-17).

Official Summary:
After slipping through a mirror, Alice (Mia Wasikowska) finds herself back in Underland with the White Queen (Anne Hathaway), the Cheshire Cat, the White Rabbit, Tweedledee and Tweedledum. Her friends tell her that the Mad Hatter (Johnny Depp) is depressed over the death of his family. Hoping to save his loved ones, Alice steals the Chronosphere from Time (Sacha Baron Cohen) to travel into the past. While there, she encounters the younger Hatter and the evil Red Queen (Helena Bonham Carter).

Review: (Vague spoilers, read at your own risk)

Through The Looking Glass is marketed as a sequel, but is also a sort of prequel given that most of the action takes place in the past. The movie balances the events after Alice’s adventures in the 2010 movie, with the previously unknown events before Alice even arrived in Wonderland. I feel the time travel was handled well, and while slightly predictable (it is a children’s movie after all), it was all around enjoyable. The special effects were amazing, and not cheesy at all, which is par the course for Tim Burton but nice nonetheless.

We see the back stories of several characters: Hatter and how he lost his family (as mentioned in the previous film), and my personal favorite, how the Queen of Hearts’ head got so big, and why she hates her sister. The new character of Time poses as Alice’s antagonist in the film, but never quite the villain, his motivations are made clear to us in the film and I like that. I like the real world scenes as much as I enjoyed Underland in this film, something I didn’t feel in the first film.

While the movie shares little with the plot of the book, it is no different in that sense from the first film. It is after all, a grown up Alice’s adventures long after she had forgotten her childhood adventures, rather than being about her childhood adventures. Though, you can still see where they drew inspiration from the books, for example, when Time curses the tea party to be stuck at a minute before tea time until Alice arrives, plays into the fact that in the book of Alice in Wonderland, when she arrives at the tea party, they all reclaim that they had been waiting for her.

Personally, I liked the message about moving on with your life, and making the most of your time. And honestly Absole and the young versions of the characters, particularly Hatter and Cheshire were my favorite parts. But I do have a soft spot for Alan Rickman and de-aged characters.

In all, I really liked the movie. It is a bit childish, but then again, that is the target audience. If you like the characters of Alice in Wonderland, or you like Tim Burton’s style, I think you’ll enjoy this movie, especially if your under the age of 18.

4 thoughts on “Alice Through The Looking Glass: Review”