So, I actually got these books awhile ago, but because I’m behind on everything else blogging wise, it stands to reason that I would have forgotten to mention these.

I got two copies of Lady Midnight by Cassandra Clare.

Now, here me out before you judge me. I originally pre-ordered the book from Barnes and Noble, you know, with the normal cover.

Then I found out about the limited edition.The limited edition cover was one there were only making 1000 copies of, and it was really beautiful, plus, IT IS FREAKING SIGNED. My book-nerd hero worship of Cassandra Clare needed it okay. The problem was, it could only be ordered from Waterstones. Which is in England. Which is bad, because I live in America. So, in order to be able to read the book when it was released instead of a month and a half later (because international shipping), I keep my original preorder. 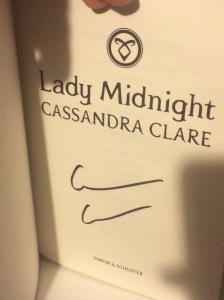 And now, I have two copies of Lady Midnight.

The moral of the story here is that I have my own money and I can do with it as I please!