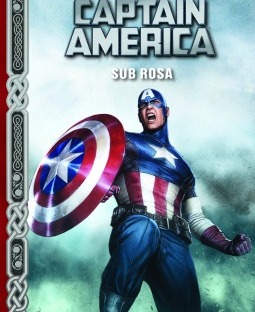 I received an e-arc copy of this book from netgalley and this is my honest review.

Frozen in a state of suspended animation since the end of the Second World War, Captain America is a man out of time. But now freed from his frozen slumber, he s back in the nick of time and ready to face threats that couldn t even have been imagined when the world had last seen him. Joe Books brings Marvel fans an all-new adventure featuring a classic superhero.”

This book is another Marvel YA novel, much like Black Widow: Forever Red which came out last year (and which I still haven’t read).

I can see the appeal of this book, a novelization of Captain America, who is my favorite avenger and thus I was very excited for this book, it is written very much like a generic action novel, emphasis on the action, and the plot is very much the kind where, if Captain America were replaced by any other character, you’d have to change virtually nothing.

I only read about 50 pages before I got bored and gave up, which happens rarely for me, but the characterizations weren’t what I’d come to expect from Marvel characters, and it felt that too much action for the sake of action with little exposition, something which I am personally not a fan of, not in movies or in books.

I don’t want to bash this book, because some people may like it, but it really really wasn’t for me. Sorry.