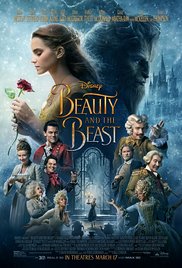 Let me start by saying that Belle is my favorite Disney princess.

This will not be an unbiased review – I felt I should mention that.

Here is an In-Depth Analysis of the Flaws if you want a different opinion – all the points made are valid – but its a princess movie, its disney, and its enjoyable. You can’t really ask for hard hitting social commentary – its a princess movie set in the 1700’s.

Now I can start the review.

Set /Costumes:
The set design and the costumes might have arguably been my favorite thing of the entire movie. Everything is perfect to the last detail – all these little touches and it grand. The scenery and the effects of the magic, the forest, the village, the castle, the enchanted objects everything is beautiful and feels like magic.
Story:
The story is, obviously, a very well known one. It is Beauty and the Beast, and closely follows that of the animated movie from 1991. But the story is slightly expanded (it’s a 2 hour movie) – we see some more background of Belle’s mother and the Beast’s childhood. We see more of Gaston and Le Fou (how was honestly a ramped up version of his animated character – he had some of the best lines of the film and I loved him in the movie – I know there was some backlash against his being gay because it was so flamboyant – but a lot of that is just the way the character is – he isn’t cast as the fool because he’s gay, that’s just his character – but I guess I’m not an authority on that – I liked what t added to his character though, he had an actual arc in the movie).
We also had a little side bar of Gaston asking Maurice for Belle’s hand in marriage. I loved all the little additions to the story – and that we saw more of The Beast and Belle falling in love. And that The Beast was literate this time, because as a prince he’d have had an education – and I like that we see more of Belle’s thoughts of her village and how they view her in turn. The world is built up more, and small plot holes like why no one remember the prince were dealt with nicely.
Music:
The story additions came with new music that I’m more than a little obsessed with. And while Emma Watson’s singing was a little noticeably autotuned- the songs and the acting made up for it. All the characters are quite over the top in songs – Le Fou paying members in the bar to sing Gaston’s praises with him, Belle’s little scoff of disgust when talking about him. Le Fou’s addition to the kill the beast song. I enjoyed it.

2 thoughts on “Movie Review: Beauty and the Beast – Live Action”