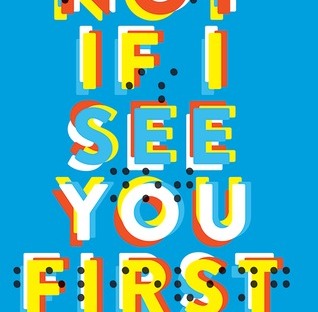 Date I Read The Book:

Don’t help me unless I ask. Otherwise you’re just getting in my way or bothering me.

Don’t be weird. Seriously, other than having my eyes closed all the time, I’m just like you only smarter.

Parker Grant doesn’t need 20/20 vision to see right through you. That’s why she created the Rules: Don’t treat her any differently just because she’s blind, and never take advantage. There will be no second chances. Just ask Scott Kilpatrick, the boy who broke her heart.

When Scott suddenly reappears in her life after being gone for years, Parker knows there’s only one way to react—shun him so hard it hurts. She has enough on her mind already, like trying out for the track team (that’s right, her eyes don’t work but her legs still do), doling out tough-love advice to her painfully naive classmates, and giving herself gold stars for every day she hasn’t cried since her dad’s death three months ago. But avoiding her past quickly proves impossible, and the more Parker learns about what really happened—both with Scott, and her dad—the more she starts to question if things are always as they seem. Maybe, just maybe, some Rules are meant to be broken.

Combining a fiercely engaging voice with true heart, debut author Eric Lindstrom’s Not If I See You First illuminates those blind spots that we all have in life, whether visually impaired or not.

I really liked this book, liked its portrayal of blindness as a fact of life needing accommodation but not pity – Parker is fully capable. And as a disability rarely seen in YA, I liked its representation (though I cannot claim it to be accurate as I have no experience be it first or second hand).

I did like the character development and the backstory that is built through out.

What I didn’t like was the abrupt nature of the ending, of her forgiveness of Scott after one conversation. The love triangle was unnecessary and the ending felt rushed. Even if the romance between her and Scott was cute.

They raised questions of her dad’s death – that it may not be an accident – without resolving them. Why raise questions if they don’t progress the story at all? And her aunt felt very “Cinderella’s step-mother” in the beginning and I disliked it.

Thats why I rated it a middling 3.5 stars.

4 thoughts on “Book Review: Not If I See You First”