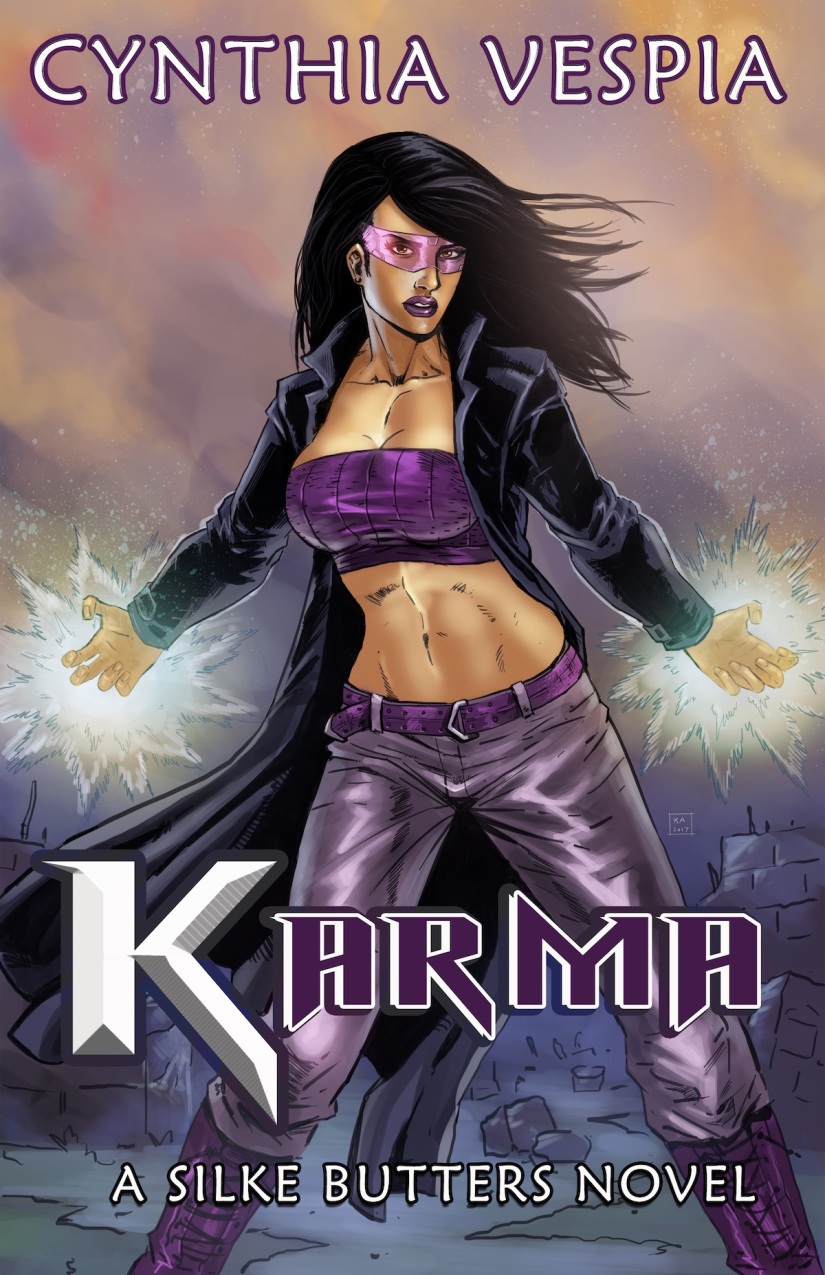 A mask, a makeup brush, and amazing powers. It’s all in a days work when supermodel turned superhero, Karma, faces off against criminal masterminds, The Sin Squad, who are endowed with their own special powers.

Silke Butters is the face of the fashion world. Her Indian heritage and long, silky black hair have made her an international icon. Silke is also one of the most powerful superheroes in the world…she just doesn’t know it yet.

When her father, Sgt. Duke Butters, dies suddenly, the block he’s had on Silke’s powers breaks causing them to come to the surface out of Silke’s control. Through the help of Joe Riggs, her father’s second in command and Silke’s former crush, she discovers that there are other superhumans like her in the world including Joe himself. As Silke’s powers begin to grow she finds herself caught in the middle of a tug-of-war between both a subdivision of the U.S. government known as Shadow Company, and a ruthless terrorist organization known as The Sin Squad. Both entities want the “enhanced” for their respective teams with Silke as the main prize.

To disguise her famous face, Silke invents an alter ego. Karma is born of necessity to decide the fate of those who are ill-intentioned and empower others with hope. Alongside Joe, and her computer hacker friend Maki, Silke develops a heroes call-to-action to battle the dark force that threatens to annihilate humanity.

KARMA is the first in a series of 5 novels. It will appeal to fans of superheroes like Wonder Woman and Supergirl, as well as novels by Patricia Briggs, Cassandra Clare, and Sherrilyn Kenyon.

Cynthia Vespia “The Original Cyn” writes speculative fiction that encompasses fantasy, the paranormal, and magic realism. Her characters are rich with detail and fabulously flawed which breathes life into them with a realism readers can identify with. Cynthia’s creative worlds are an amalgamation of many different genres which offers a cross-over appeal. Her novels are emotionally engaging, leaving hearts pounding and pages turning. She has been nominated for a “Best in Series” award for her fantasy trilogy Demon Hunter.
​
She has also turned her creative energy into Original Cyn Creative Services, an award-winning copy, design, and video source for the development of promotional content. With over a decade of experience her background has included feature writing for a variety of publications; web design; national marketing and promotional campaigns via print and copy; script writing; video trailers and montages for authors and entrepreneurs. Her creative work has won awards for “Most Artistic Trailer” Demon Hunter 2: Seek & Destroy; “Best Video” Bloodlines; “Honorable Mention” for Anti-Bullying Campaign, and a nomination for “Best Cover Design” Demon Huntress: Destiny Unleashed.
​
During her downtime she enjoys getting lost in a good book or movie, and keeping active through martial arts and weight training.
​
Cynthia is available for  freelance work, conventions, and workshops.

This cover reveal was organized by: