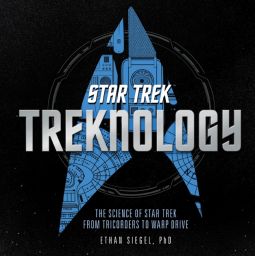 The Science of Star Trek from Tricorders to Warp Drive

The name Star Trek conjures images of faster-than-light spacecraft, holographic crew members, and phasers set to stun. Some of these incredible devices may still be far from our reach, but others have made the leap from science fiction to science fact—and now you can learn the science and engineering of what makes them tick.

Treknology looks at over twenty-five iconic inventions from the complete history of the Star Trek television and film universe. Author Ethan Siegel explores and profiles these dazzling technologies and their role Star Trek, the science behind how they work, and how close we are to achieving them in the real world today.

This stunning collection is packed with 150 superb film and television stills, prop photography, and scientific diagrams to pull you into another world. Brace yourself for a detailed look at the inner workings of Star Trek’s computing capabilities, communications equipment, medical devices, and awe-inspiring ships. This book is one that no fan of Star Trek, or future tech, will want to miss.

I received an e-arc of this book from Netgalley in exchange for an honest review.

This book explores the technology of the Star Trek universe. As I huge Star Trek nerd, I loved this. I think the technology they chose to showcase were well picked, well organized, and the sections were well written. Though, if you don’t know Star Trek, you will be fully lost.

Each section is helped by stills and pictures from pretty much every iteration of Star Trek, focusing raining on TOS, TNG and the new movies (having both TOS and new canon stills was a bit weird because you have two faces labeled Captain Kirk etc. but it didn’t negatively impact the book).

Some sections were written as if in-universe. With the science behind the technology explained as if it were a real technology. With history and discovery dates etc. which I loved. Other parts left the in-universe and compared the technology to real world technologies etc. and elaborated the role said technology played in a specific Star Trek show. I think it might have benefitted from being one or the other rather than both.

In all, I thought this was a great book, though it would have been much better in person, as the digital edition resolution isn’t great or easy to flip through. I recommend this for any serious Star Trek fan.

6 thoughts on “Netgalley Review: Treknology – The Science of Star Trek from Tricorders to Warp Drive”