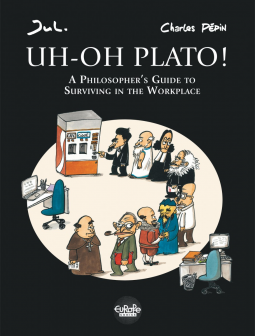 A Philosopher’s Guide to Surviving in the Workplace

by Script by Charles Pépin / Art by Jul

France—the early 21st century. A young student must complete a corporate job shadowing internship. Thanks to a cousin on his father’s side, also of Greek descent, he gets a foot in the door at a famous consulting firm. He will soon discover the true face of office life. The intern’s name: Kevin Plato. From Nietzsche the director of human resources, to Foucault the video-surveillance monitor, to Teresa of Ávila the executive secretary, and many, many more, Plato dives headfirst into the world of work… philosopher style.

I received an e-arc copy of this book in exchange for an honest review.

I thought it would be funny, with philosophy references/jokes yeah, maybe some I didn’t get but it just…wasn’t. Even the references I understood weren’t clever or funny it was just…there. It was teaching to be educational and clever, but it was mostly dense, and assumed you had more knowledge than I did at least. If you really like or know philosophy, you may like this, but it really wasn’t for me. There are a bunch of super-specific in-side jokes and essays that read really academic rather than funny. I did like the illustrations though.