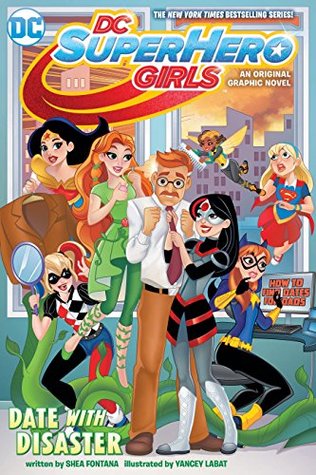 Catwoman is out alone on the prowl one night when KABOOM–an explosion at S.T.A.R. Labs rouses the other girls from their slumber. Star students Batgirl and Lois Lane both know the lab incident is fishy, and they meet later to share clues. But nothing could’ve prepared Batgirl for what they see next–Batgirl’s dad on a date!

Batgirl is grossed out until her friends convince her Dads get lonely, too. And with the school dance coming up and everyone pairing off–heck, even Principal Waller has a date with a guy named Deadshot–maybe it’ll be okay just this once. The girls place a personal ad for Commissioner Gordon while they delve deeper into the mystery surrounding the explosion, but they’re about to discover more than who is behind the attack on S.T.A.R. Labs. Could it be that posting an ad looking for dates for the commissioner is like advertising catnip for criminals?

DC SUPER HERO GIRLS: DATE WITH DISASTER! continues to develop the relationships forged in DC SUPER HERO GIRLS: FINALS CRISIS, HITS AND MYTHS, SUMMER OLYMPUS, PAST TIMES AT SUPER HERO HIGH and OUT OF THE BOTTLE. Written by Shea Fontana, this Batgirl-centric story is perfect for girls ages 6-12.

The DC Super Hero Girls line is an exciting new universe of super-heroic storytelling that help .

I received a copy of this book through a Goodreads Giveaway!

To be honest, a lot of my review for Batgirl At Superhero High could apply to this graphic novel volume –I like the idea of these books, making superheroes for girls too, not just books. Encouraging reading with the books etc. Its pretty cheesy and dumbed down, but it is a lower middle grade book, so I expected as much. I do think pretween girls, which its intended for, will enjoy it if they enjoy superhero stories at all.

In the beginning, it was pretty clear this was a sequel/companion, as previous events are recapped, but it didn’t impair the story at all past the initial “wait what” moment. At certain times, the characters seemed to act a bit older than their supposed ages, and it through me off when hearing a familiar DC comic name that was characterized differently, so get used to the idea of “alternate DC universe with every hero and villain a 12 year old in superhero boarding school”. –

Which makes sense, since the TV show, novels, and graphic novels are all the same continued universe – through I did think reading the entire thing in order is necessary, as this is the sixth graphic novel and I haven’t read any of the others. Something I really liked was the little “roll call” section in the beginning naming all the characters and their powers, further letting you pick up this volume without knowing the previous ones.

The artwork is really nicely done – though with all the loud colors, you can tell this is definitely meant for younger readers. The plot is a little simple, but fun overall. I like how they portrayed the girls dealing with and standing up to sexism, specifically when the mayor is letting Jimmy Olsen cover a story he claimed was too dangerous for Lois Lane, etc. A lot of puns were in the dialogue – if thats something you really like or dislike.

The romances were cute, Barbara freaking out about her dad dating, Harley playing matchmaker, and Steve Trevor flirting with Diana.

I thought it was cute overall, a good read if you like this sort of thing.

With the Giveaway, I also received

Its a little shopping catalogue of all the DC volumes coming out this year – with some sections detailing TV adaptations and stuff too which I really enjoyed. I thought it was a cute addition.