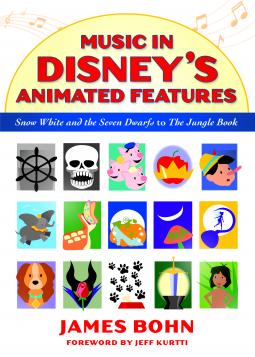 The popularity and critical acclaim of Disney animated features truly is built as much on music as it is on animation. Beginning with Steamboat Willie and continuing through all of the animated features created under Disney’s personal supervision, music was the organizing element of Disney’s animation. Songs establish character, aid in narrative, and fashion the backbone of the Studios’ movies from Snow White and the Seven Dwarfs through The Jungle Book and beyond.

Bohn underscores these points while presenting a detailed history of music in Disney’s animated films. The book includes research done at the Walt Disney Archives as well as materials gathered from numerous other facilities. In his research of the Studios’ notable composers, Bohn includes perspectives from family members, thus lending a personal dimension to his presentation of the magical Studios’ musical history. The volume’s numerous musical examples demonstrate techniques used throughout the Studios’ animated classics.

This book goes in depth not only on the famous Disney movie songs, but the scores and character themes, from the earliest Disney cartoons and shorts (Steamboat Willie, Mickey cartoons, Silly Symphonies) through the earlier Disney movies (through The Jungle Book). It goes in depth on the composition, and how the scores made the movies whole and affected their acclaim, as well as all the composers who played a part. With bits of sheet music in-between to help illustrate which parts there were talking about.

I thought this was really well put together and super interesting, though I’ll admit I skimmed it more than read, but thats because I have a less than limited understanding of sheet music/composition and its so detailed that I didn’t care as much to read it fully – nothing against the book thats just me.

Its great for Disney and music fans.