I love Pokemon. I’ve been playing since Firered and Leafgreen came out, when I was about 3 or 4 years old.

I started reading Pokemon fan theories when I was about 9, and learned about websites like Game FAQ and such.

This could probably get a part 2 if you guys like this!

A deconstruction of the first-generation Pokemon universe 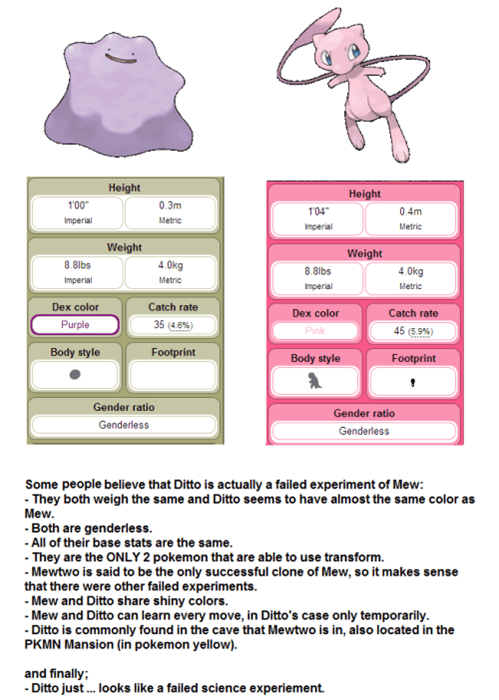 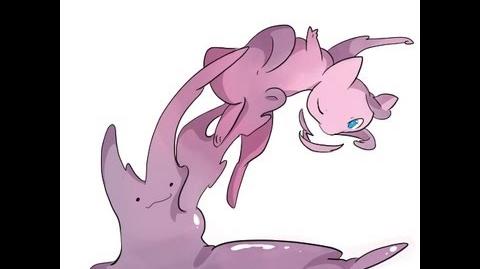 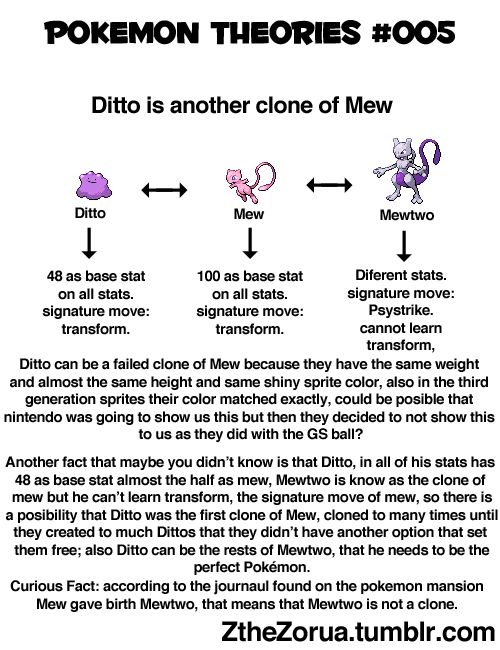 In the Pokemon series, Mew is the ancestor to every known Pokemon, containing information on every other Pokemon in its cell structure, so it has the ability to use all technical and hidden machines. A group of scientists dreamed of creating the world’s greatest Pokemon. Their plan was to clone Mew and amplify the creation’s powers, resuling in one the first artificial Pokemon, Mewtwo. This theory states that more than just Mewtwo was created; Ditto may be the result of failed attempts to create Mewtwo from the scientists.

Most media in Pokemon will use occasionally use the word, “fetus”, an interesting choice, to describe Mew, as well as potray Mew as a fetus/embryo. Mew even surrounds itself in a pink bubble, which strongly resembles a placenta. The whole idea was to get across the idea that Mew was the birth of all Pokemon. It is unknown if there are more than one Mew, but we do know that it was Mew who populated the world with its many spawn of all shapes and sizes. Additionally, we also know that Mew is capable of asexual reproduction, a trait only one other Pokemon seems to have, Ditto. There are many connections between Mew and Ditto which shows they have very similar genetic make-up.

With all of these connections between the two Pokemon, its odd that they behave quite differently. Mew is elusive and rare, where Ditto’s are generic and common. Ditto is an amoeba-like Pokemon in its amorphous stage, a trait shared with stem cells, which may have been the motive behind the creation of Ditto. Stem cells provide a vast amount of aid in the area of genetic engineering, and would almost been necessary for trying to create Mewtwo. On Cinnabar Island, clues allude to this place for the site of experiments in the creation of Mewtwo, as well as countless test cloning. Coincidentally, Ditto is found everywhere on Cinnabar Island.

So, is Ditto a clone of Mew? Perhaps there is a larger picture we’ve only skimmed over. Is the connection between Ditto, Mew, and Mewtwo an analogue for stem cell research?

There is a lot of in-game data which compares Mew and Ditto which supports this theory.

This is another super popular theory, and one I fully believed was real as a kid, as in, intentional and confirmed type of real.

In the anime, Delia says she raised Ash by herself is that his father married her fast and then left just as fast due to him being a Pokémon Trainer. It is also implied that the reason he and Ash’s grandfather didn’t return is because they achieved nothing in their goal. (Bulbapedia)

The biggest theory of who Ash’s father is, is that his father is Giovanni. In Pokémon Live!, it is stated that Delia dated Giovanni and was in his gang. Interesting reddit thread on the theory.

There are a couple different theories of Ash’s dad, but my personal favorite is the Giovanni as Ash’s dad theory. Its supported by the throwaway line in the Pokemon musical where they say Delia dated Giovanni shortly before Ash was born. It also makes Jesse and James make sense, as Giovanni continues to send his most bumbling employee after this kid, because he doesn’t actually want his kid hurt, just wanna tabs kept on him.

I’m pretty sure that this started as a creepy pasta, but the fact that Ash in the anime is still 10 seven regions later is… Yeah, a little odd. They should have given him at least one birthday by now.

The entire theory is pretty dark and creepy, the gist of which is, in the first episode, Pikachu’s electric shocks put Ash into a coma. In his coma, he meets all sorts of legendary Pokemon, and reach every league and gym in record time in each region, none of which should be possible for a ten year old kid.

A more lighthearted version of the “Ash never ages” theory that I’ve seen around is that, since seeing Ho-Oh is supposed to grant eternal happiness, Ash doesn’t age in his quest to be the best Pokemon master ever, and won’t age until he can achieve this goal, thanks to his glimpse of Ho-Oh in the first episode.

This theory poses that shortly before the first gen games, Kanto was at war, and recently ended said war.

Major evidence of this is pointed as:

Overall, its one of the more interesting Pokemon theories.

I hope you guys liked this!

Do you have any favorite Pokemon theories?

Have you never heard any of these?

Do you want to see a part two?