A group of people discover that they have extraordinary powers and must decide whether to use them for good or for evil. The ranks of both the good and bad forces swell as more people discover their super powers, and the battle between good and evil rages. 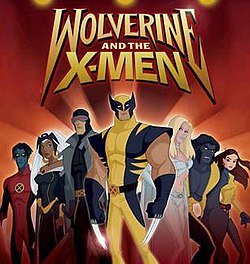 Wolverine reunites the X-Men to battle against the injustices of the Mutant Response Division (MRD).

After almost losing his life in a plane crash that killed his father, teenage prodigy Tony Stark, heir to the billion-dollar corporation Stark International, honors his dad’s memory as the superhero Iron Man, his alter ego charged with protecting those who are less fortunate than him. With the help of his friends Jim “Rhodey” Rhodes and Pepper Potts, Stark uses his suit of invincible armor and his technological inventions to take on such enemies of world peace as Mandarin, Iron Monger, Crimson Dynamo, Whiplash, Mr. Fix and Count Nefaria.

Comic-book superheroes — including Hulk, Iron Man and Thor — join forces to become the Avengers as they fight villains who have escaped from the Vault, the Cube, the Big House and the Raft. Among the villains the Avengers battle are Red Skull, Grim Reaper, Wonder Man and Cobra.

Teenager Peter Parker tries to juggle his two new worlds — he must learn how to use his new powers and responsibilities as Spider-Man while keeping it a secret from his high school friends and teachers. As important as school is to Peter, Spider-Man is expected to be a super hero and protect citizens from mutant lizards, an evil vulture and a cast of other villains.

Every Animated Marvel Show Ever:

1 thought on “A Guide to: Marvel TV Shows – Animated Shows”