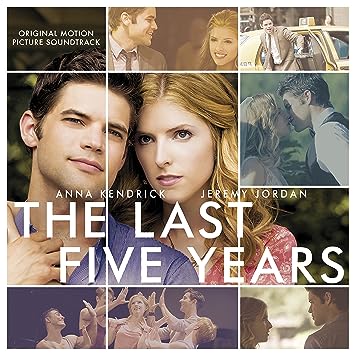 In New York, a struggling actress (Anna Kendrick) and a successful writer (Jeremy Jordan) sing about their failed marriage from two perspectives.

The film’s song numbers follows the musical’s, alternating between Cathy and Jamie with a song or two sung by both.

Depressing but one of the best break-up/grief songs I’ve heard.

I love this song, its catchy and the foreshadowing is so good.

Cathy going OFF is one of the best parts of the musical.

My favorite song of the musical.

Also the last few lines is basically what every college student feels always:

You can almost start to forgot that things are gonna end poorly, and then you get to this song. This song makes me hurt for Cathy more than Still Hurting does.

This song is really cute. And such a lie.

This one is really funny.

“The Next Ten Minutes” – Jamie and Cathy

The one time their timelines cross each other. Really sweet.

This song stresses me out, and shows the first fractures in their relationship.

Depressing as all hell, but god do you feel like Jamie has a point for just this one song. He screws it up of course, but you feel for him here.

“I Can Do Better Than That” – Cathy

A GREAT song and its on my motivational study playlist.

“Nobody Needs to Know” – Jamie

One of the best cheating songs from musicals.

“Goodbye Until Tomorrow/I Could Never Rescue You” – Cathy and Jamie

Poor Cathy is so happy and Jamie is such a dick, especially knowing what you know from “I Can Do Better Than That”.