The Owl House is an animated fantasy-comedy series created by Dana Terrace, which airs on Disney Channel. The first season premiered on January 10th, 2020, and currently has a total of 19 episodes, all available to stream on Disney+. A second season has already been ordered, though there is no official release date as of yet, though it is possible season two will be delayed due to Covid-19.

The series follows Dominican-American fourteen-year-old Luz Noceda (voiced by Sarah-Nicole Robles), who enjoys “editing anime clips to music and reading fantasy books with convoluted backstories” as she says in the pilot episode. In the pilot, Luz’s mother intends to send Luz to “Reality Check” summer camp to learn to fit in with other children, and stop being so “weird.”. Before leaving for camp, Luz stumbles upon a portal opened by witch Eda Clawthorne (voiced by Wendie Malick), the Owl Lady. This leads Luz to a magical realm called The Boiling Isles. Luz convinces Eda to take her on as a witch apprentice, which Eda initially resists, as humans are not typically capable of performing magic. Eda eventually gives in, and Luz moves into her home, called The Owl House, along with a demon friend of Eda’s known as King (voiced by Alex Hirsch).

Over the course of the season, Luz befriends other children of the Boiling Isles, notably Willow Park (voiced by Tati Gabrielle), a witch who has trouble controlling her magic, and Amity Blight (voiced by Mae Whitman), the top student at the Hexside School of Magic and Demonics, where Luz eventually enrolls, despite being human. Amity and Luz have a rocky start to their friendship, as Amity disapproves of Luz trying to learn magic as a human, and bullies Willow for her lack of magical prowess, however, Luz and Amity eventually bond over a book series called The Good Witch Azura, and become friends.

“Enchanting Grom Fright” is the sixteenth episode of The Owl House, and premiered on August 8th, 2020. In this episode, Hexside prepares for Grom, which Luz interprets as their version of a Prom Night. However, in The Boiling Isles, Grom is named after the Gromethous, or fear bringer, which can read people’s minds, discover their fears, and shapeshift into them, and one student is chosen each year to defeat it. Amity is chosen as the Grom Queen, and is embarrassed by the potential for others to discover her deepest fears, so Luz volunteers in her place. Luz becomes overwhelmed in her fight with the Grom and Amity helps her, revealing that her greatest fear is to be rejected, in this case from the unknown person she wanted to ask to the dance. While Amity’s crush on Luz is revealed to the audience via her discarded dance invitation, Luz remains oblivious. 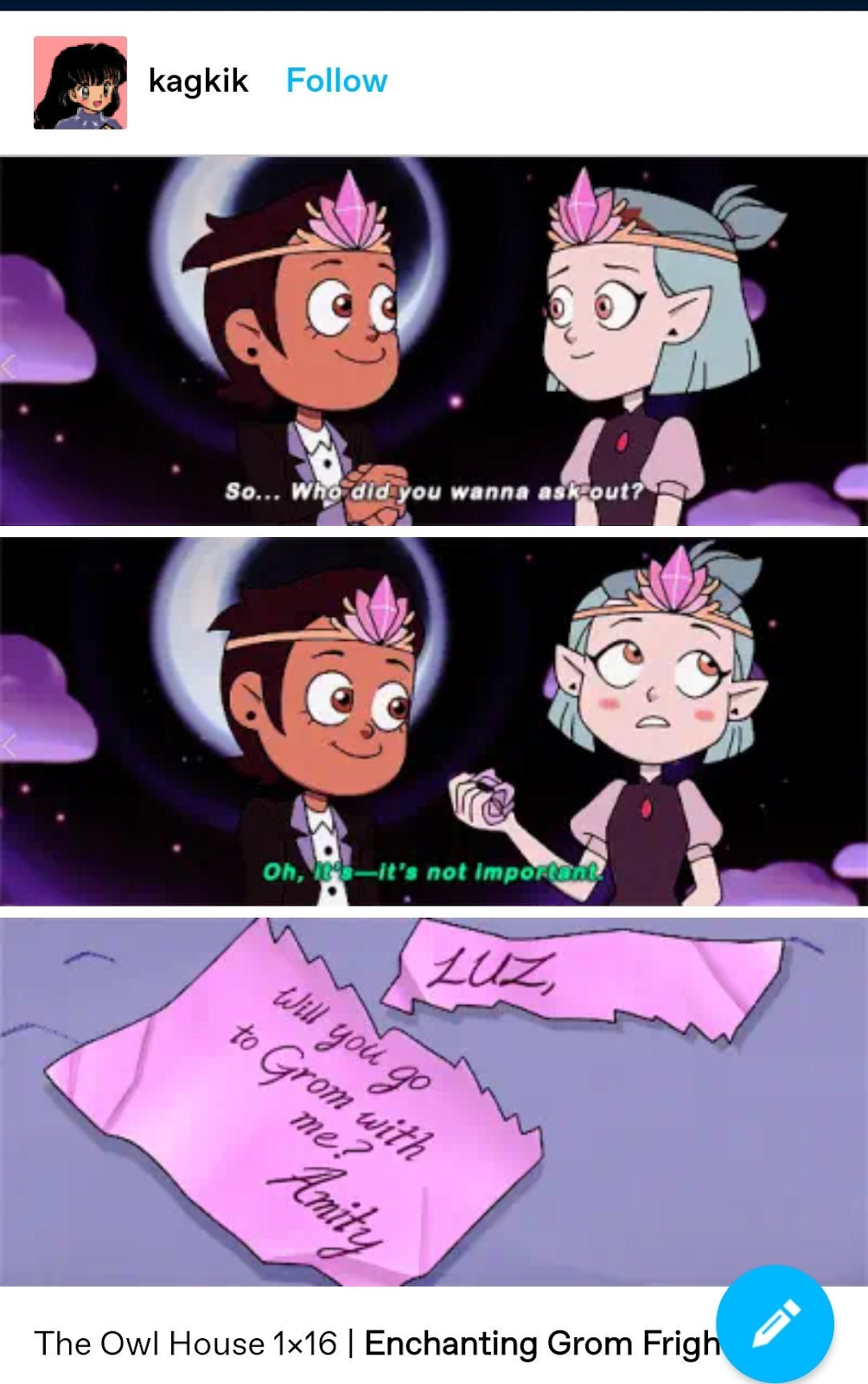 A screenshot from episode 1×16 “Enchanting Grom Fight”, revealing that Amity’s crush is on Luz.

In the end, Luz and Amity dance together, while casting spells to defeat the demon Grom (video hyperlinked to the image below). The animation supervisor for the show, Spencer Wan, referred to their dance as the first time he got to “do anything even remotely queer.”

A clip from episode 1×16 “Enchanting Grom Fight”, where Amity and Luz dance, and defeat Grom.

This episode made Disney Channel history, confirming Amity Blight to have a crush on Luz Noceda, which makes them the first queer protagonists of a Disney Channel show. While Disney Channel has had explicitly queer characters before, they have all been side characters, such as in High School Musical: The Musical: The Series, where protagonist Nina has two mothers, or Cyrus Goodman in the show Andi Mack. In September of 2020, creator Dana Terrace confirmed that Luz is bisexual, and Amity is a lesbian.

Amity and Luz’s slowly developing relationship has drawn particular attention, because typically when a queer couple is confirmed in a children’s cartoon, it is done in the last few episodes of the show, when the chances of it getting the show cancelled, or otherwise drawing the ire of studio executives is less risky. Which makes some sense as already Disney has received pushback from parents who think that a same-sex couple doesn’t belong in a children’s show. Some other recent shows which follow this pattern are the Nickelodeon show The Legend of Korra, which confirmed the romantic relationship between protagonist Korra and Asami in the last moments of the last episode, and the Netflix Original series She-Ra and the Princesses of Power, which has protagonists Catra and Adora get together at the very end of the show as well. However, the show has received great critical reception and has been nominated for an award in Outstanding Kids and Family Programming by GLAAD.

As for how this episode works within the context of the show as a whole, it does a lot for Amity’s character. Over the season, Amity progresses from being stuck-up, but fairly isolated, to being much kinder and friendlier, as Luz brings her out of her shell. The episode prior to this, Willow and Amity begin to reconcile their childhood friendship, after years of being antagonistic. The time jump between episodes is unclear, but Amity seems to be much better friends with Luz and Willow in this episode, which is a little jarring as they were still on hesitant terms the prior episode.

This episode also does little to further the plot of season one, which centers largely on Eda, and the secrets she is keeping, but this episode does build on Luz’s friendships, as well as her anxieties. Namely, the Grom reveals just how anxious Luz is of being away from home, and of lying to her about where she is. We learn in this episode that Luz is able to use wifi and text her mother when Eda’s portal to Earth is open, which answers that question, but Luz is lying and telling her mother that she is at the summer camp. We also learn, though Luz does not, that someone is sending her mother letters, pretending to be Luz at summer camp, though we are not given an answer as to who in this episode.

Overall, this episode is where the show seems to be coming together in plot, showing off Luz’s skills in magic, and setting up character dynamics as we head into the finale, and then season two. For those who have finished the season, you’ll know Amity and Luz’s relationship doesn’t continue further this season, though Amity gets progressively flustered at being in Luz’s presence. Hopefully, we’ll see more of their relationship in season two, and hopefully Disney will handle it well.