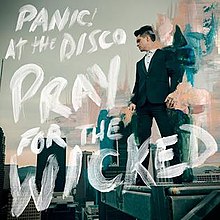 Pray for the Wicked is the sixth studio album by American rock band Panic! at the Disco. The album was released on June 22, 2018. on Fueled by Ramen and DCD2. It is the follow-up to the band's fifth studio album, Death of a Bachelor (2016). (Fuck A) Silver Lining Best Line:  Now I'm dodging, dodging Everything you think that I'm not Archetype of television… END_OF_DOCUMENT_TOKEN_TO_BE_REPLACED

Today, April 15th, I'm going to the Panic! concert here in south Florida with a group of friends, and I couldn't find a Panic! tag that wasn't dead and done. So I made one! Rules: 1 - Tag the creator (RiverMoose-Reads) 2-Answer the questions 3 - Name your favorite song from each album. 4 -… END_OF_DOCUMENT_TOKEN_TO_BE_REPLACED

https://www.youtube.com/watch?v=8sRjxi2Dk-8 Lyrics Okay, this song is great! And now I'm dying more than ever for their new album "Death of A Bachelor" to come out already! I liked the references to some of their old videos they had ("I had a cane and a party hat" = I write sins not tragedies)("Drunk pre-meds and… END_OF_DOCUMENT_TOKEN_TO_BE_REPLACED